Top Posts
A Game of Thrones: The Card Game Second...
An Introduction to AGOT.Cards
To Build a Meta You’re Going to Have...
New to the Show? New to the Game?...
The White Book S6E12- 222
To Build Your Meta You’re Going to Have...
The White Book S8E25 – 295
Store Championships 2023
Game Night Kit I
Regional Tournaments 2023
Home Articles Announcing As High As Honor 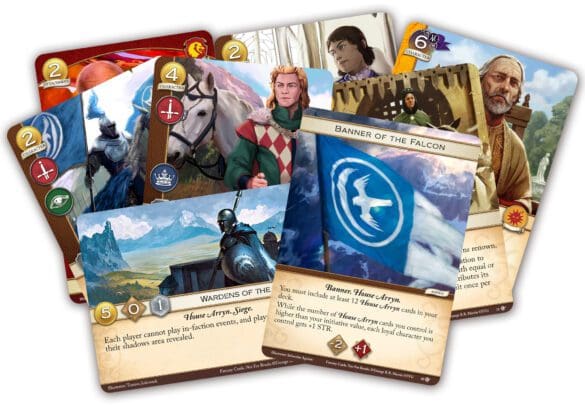 The Design Team and Committee are excited to bring you As High As Honor, the latest GOT Era expansion! Unlike previous packs, As High As Honor’s primary interest is the factionless Neutral cards; with new characters, locations, attachments, and events, this pack triples the number of House Arryn cards available!

Accompanying them are two new cards for every faction, two new plots, and a new agenda. In addition to expanding on concepts introduced in For the Realm and Bran the Builder, this pack offers rewards for low initiative, faction-targeting counters, and new tools for revealing and removing cards.

For an example of House Arryn’s innovations, we have the new Littlefinger! Exchanging Stealth for Insight, this ambitious regent is not content with his own cards – he insists on seeing yours! Furthermore, if Littlefinger leverages this information correctly, he can consolidate power on himself – even stealing it from other players.

Assisting Littlefinger in his regency of the Vale is his Bastard daughter, Alayne Stone. Inheriting her father’s Stealth, Lord Baelish’s mysterious daughter is able to disable some of Westeros’ greatest lords and ladies. Curiously, she can also double as protection for Sansa Stark…

Crucial to Lord Baelish’s regency is the little Lord himself: Robert Arryn, affectionately known as Sweetrobin. While seemingly frail and weak, the young Lord of the Eyrie demonstrates As High As Honor’s new relationship with Initiative: if a revealed card’s cost is higher than its owner’s initiative, Sweetrobin can make it fly – permanently removing it from the game.

Around these three, we find the Eyrie’s servants and spies: Maester Colemon, a subtle manipulator of Condition and Item attachments; Mord, the simple Guard who can render blank the character of any high Initiative player; Ser Vardis Egen, whose sacrifice can banish an opponent into shadows; and Benjicot, who forces the revealing and discarding of any card without the House Arryn or Fool traits. Other faithful servants include the Lord Protector’s Retainer and the Winged Knight. The former can return to your hand to counter any effect intended for a Lord or Lady, while the Winged Knight can save such a character from death by instead removing them from the game.

Distinct from the Eyrie’s court, the lords and ladies of the Vale must leverage their influence through neutral locations. Nestor Royce can grant himself either Renown or Intimidate as the situation demands, and Anya Waynwood can commandeer the strength of non-participating characters. Lady Waynwood’s ward, Harry the Heir, is especially valued for his ability to stand a neutral location once used. And even the Knights of the Vale rely upon such locations, strengthening any character sharing a Trait with them – and are even more effective with an Initiative of 0, such is the patience of the Vale.

With so many of the Vale’s lords and ladies reliant upon kneeling neutral locations, As High As Honor naturally provides more – with the effects of The Vale of Arryn and The Bloody Gate actually becoming stronger if triggered while knelt. Above them, however, stands The Eyrie itself; gaining immunity while it’s controller has the lowest possible Initiative, this Stronghold rewards the use of loyal and House Arryn characters by contributing greater and greater strength for each participant you control.

The final factionless cards to examine are: The Lord Protector of the Vale, a Title which allows the bearer to lend its strength to House Arryn’s cause; Lysa’s Letter, which uses claim reduction to encourage a specific challenge type; and The Seed is Strong, which either forces the discarding of characters or the revealing of both hand and shadows.

Each of these cards offer new interactions with revealing, removing, delaying, and denying. And it is with these themes that we progress to the in-faction cards:

The Prince of the Narrow Sea grants both Renown and Commander upon the wily Salladhor Saan, and allows a player to turn the loss of Initiative into a tactical retreat – while also kneeling your opponent’s cards! The Greyjoys, in comparison, may seem ill-suited to this pack’s slow and scheming tactics. The ironborn of Torrhen’s Square, however, have kept their stranglehold on The North by exchanging Initiative for greater efficiency with Pillage.

The Lannister’s antagonistic relationship with the Vale can be seen with their use of the dreaded Mountain Clans, which The Halfman’s Horde greatly rewards; discarding a card for each unique Clansman, this Army also boasts access to Power challenges and the assault keyword. Patience and manipulation are more easily adopted by the Martells, however, as seen with A Traitor’s Whisper; not only can this event reveal multiple opponents’ cards in shadows, but it allows you to force them into play prematurely.

The Night’s Watch would respect the Vale’s strong defences and high walls, with Defensive Debris being an unpleasant surprise for anyone standing below. In addition to strengthening the attached character, this card prevents any player’s card of a specific cost from entering play or being played. The Starks may seem too brash and blunt for As High As Honor’s slow-paced secrecy, but House Manderly proves otherwise with The Wolf’s Den; through Wyman and Wylla’s use of death and sacrifice, the bottom card of your deck can easily slip into shadows.

And to close the faction cards, Houses Tyrell and Targaryen demonstrate the Vale’s two sides: the patience of a powerful Knight, and the masterful manipulations of a Spy. Ser Robar Royce of the Rainbow Guard boasts impressive strength, while lacking in speed and Initiative; Lysono Maar, meanwhile, forces an opponent to declare their defenders before the attackers are even chosen.

As High As Honor’s augmentation of House Arryn concludes with a plot and an agenda: The Wardens of the East and the Banner of the Falcon. In addition to the plot’s low Initiative, it also reveals all cards in shadows and prevents the use of in-faction events. The agenda, meanwhile, rewards the inclusion of House Arryn by providing a larger hand and stronger loyal characters.Many more cards remain for you to discover and explore, and we hope you enjoy the new possibilities provided by As High As Honor. We look forward to what the future will bring!