Top Posts
A Game of Thrones: The Card Game Second...
An Introduction to AGOT.Cards
To Build a Meta You’re Going to Have...
New to the Show? New to the Game?...
The White Book S6E12- 222
To Build Your Meta You’re Going to Have...
The White Book S8E25 – 295
Store Championships 2023
Game Night Kit I
Regional Tournaments 2023
Home ArticlesConclave Archive Restricted List 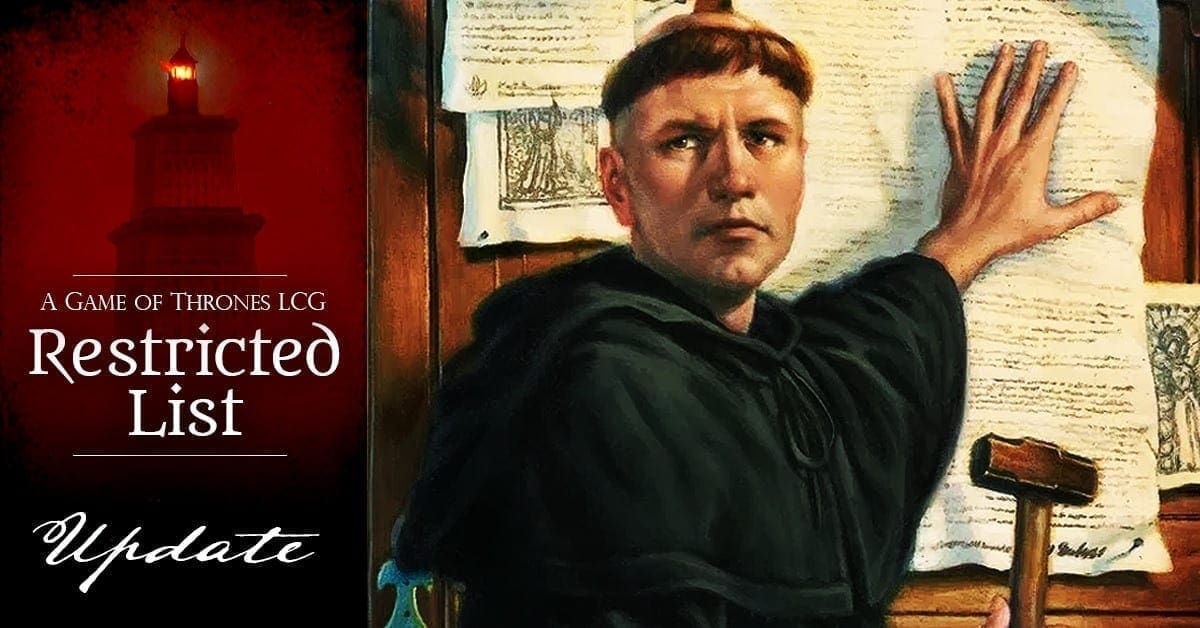 Happy Monday! We are happy to announce our first update to the Joust Restricted List.

This is a first pass to further improve on the Worlds metagame. We intend to be more proactive and regular in updating the Restricted List in BOTH directions (cards coming on and off the list). Please note “The Things I Do For Love” pack (Bin Pack) is not legal at this time.

It is important to us to listen to player feedback, and starting with the next Restricted List update, we intend to use the survey data to help inform our decisions. However, we felt it was prudent to release a more immediate update to allow for a single, unified list, rather than each event going forward having a list of its own choosing. Events that have already been announced with bespoke restricted lists should not feel obligated to adopt this list. We recommend all other events utilize this official list going forward.

Added to the Restricted List:
Neutral:
Kingdom of Shadows (Beneath the Red Keep)
The King in the North (Favor of the Old Gods)
Return to the Fields (Kings of the Isles)
Bribery (Dragons of the East)

Lannister:
The Red Keep (Dragons of the East)

Targaryen:
Qotho (House of Thorns)
Overwhelming Numbers (Dragons of the East)
Gifts for the Widow (Daggers in the Dark)