Top Posts
A Game of Thrones: The Card Game Second...
An Introduction to AGOT.Cards
To Build a Meta You’re Going to Have...
New to the Show? New to the Game?...
The White Book S6E12- 222
To Build Your Meta You’re Going to Have...
The White Book S8E25 – 295
Store Championships 2023
Game Night Kit I
Regional Tournaments 2023
Home ArticlesFAQs & Info Ravens from the Citadel Ravens from the Citadel

April 2nd, 2020 update: April fools! The below FAQ was an April fools joke! None of the rules below are correct. Official FAQ for Game of Thrones: The card game second edition. As the game begins a new chapter, we have collected a set of questions recently asked to FFG that will presumably not be appearing in any official FAQ update. These represent clarifications or, at times, changes in how we’re interpreting the rules, and as such we felt it important to provide them to the community. With these questions settled we are excited to take our first steps into the future of the game! Proof reading and contributing editor: The Archmaester of Rules The Wall TMoW 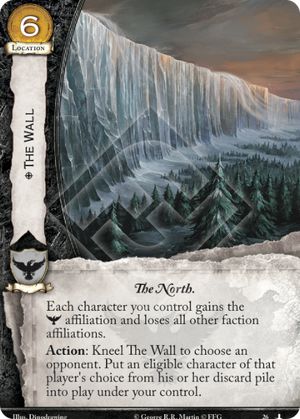 The Wall (TMoW) The Night's Watch Location Plot deck limit: 3. The North. Each character you control gains the affiliation and loses all other faction affiliations.
Action: Kneel The Wall to choose an opponent. Put an eligible character of that player’s choice from his or her discard pile into play under your control. The March on Winterfell #26 ***** Time of Plenty 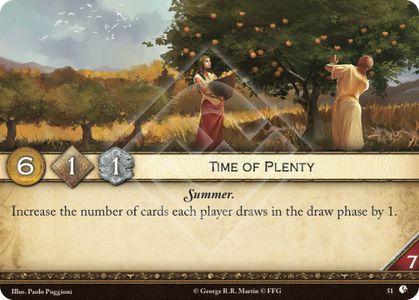 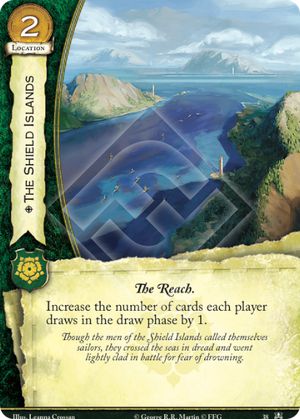 The Shield Islands House Tyrell Location Plot deck limit: 3. The Reach. Increase the number of cards each player draws in the draw phase by 1. Kings of the Isles #38 ***** Heir to the Iron Throne 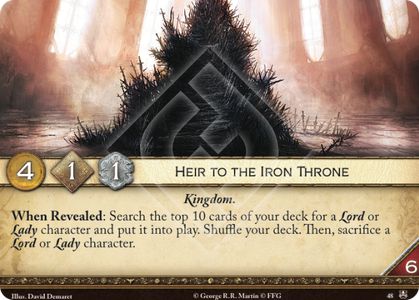 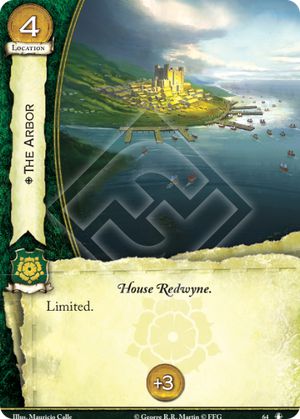 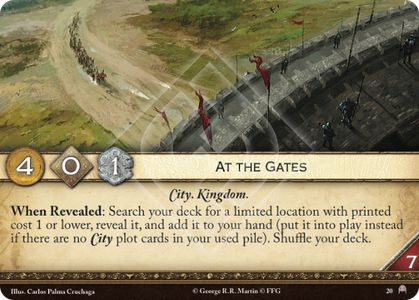 At the Gates Neutral Plot Income: 4. Claim: 1. Reserve: 7. Plot deck limit: 2. City. Kingdom. When Revealed: Search your deck for a limited location with printed cost 1 or lower, reveal it, and add it to your hand (put it into play instead if there are no City plot cards in your used pile). Shuffle your deck. At the Gates #20 ***** Forced March 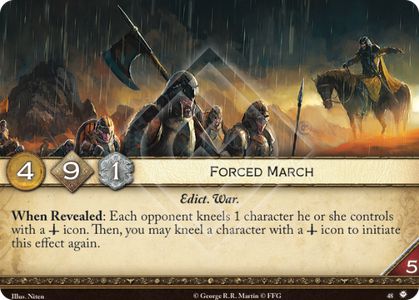 Forced March (SoD) Neutral Plot Income: 4. Initiative: 9. Claim: 1. Reserve: 5. Plot deck limit: 2. Edict. War. When Revealed: Each opponent kneels 1 character he or she controls with a icon. Then, you may kneel a character with a icon to initiate this effect again. Sands of Dorne #48 ***** This Must Be Answered Fiercely! 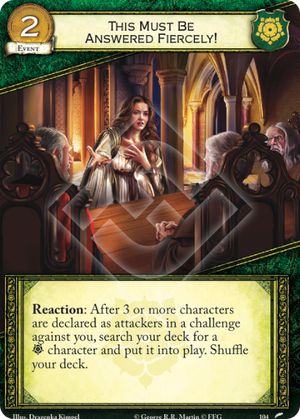 This Must Be Answered Fiercely! House Tyrell Event Plot deck limit: 3. Reaction: After 3 or more characters are declared as attackers in a challenge against you, search your deck for a character and put it into play. Shuffle your deck. Someone Always Tells #104 ***** Ser Waymar Royce 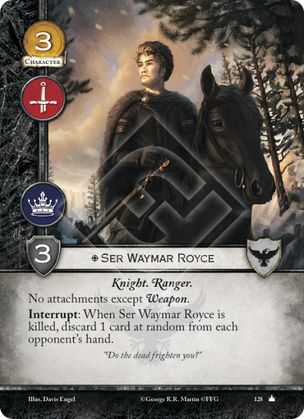 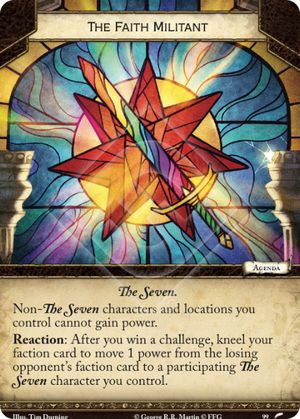 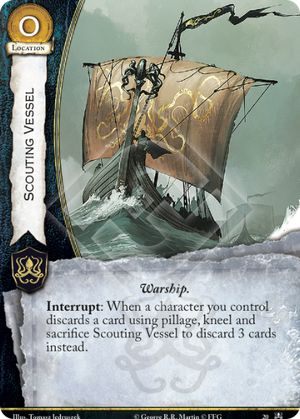 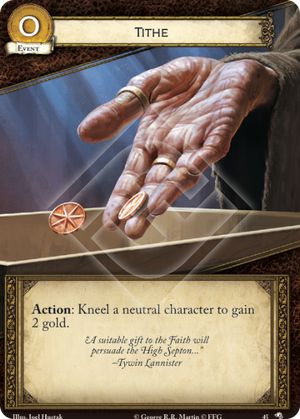 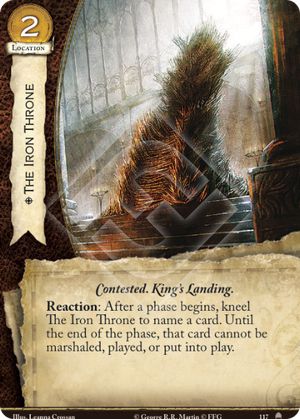 The Iron Throne (LMHR) Neutral Location Plot deck limit: 3. Contested. King's Landing. Reaction: After a phase begins, kneel The Iron Throne to name a card. Until the end of the phase, that card cannot be marshaled, played, or put into play. Long May He Reign #117 ***** Knights of the Hollow Hill 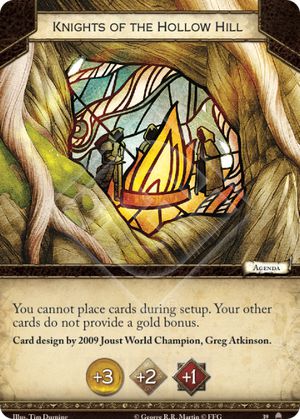 Knights of the Hollow Hill Neutral Agenda Plot deck limit: 1. You cannot place cards during setup. Your other cards do not provide a gold bonus.
+3 Income. +2 Initiative. +1 Reserve. City of Secrets #39 ***** Tears of Lys 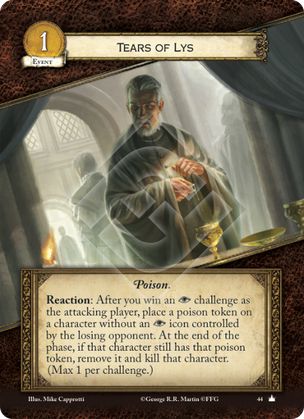 Tears of Lys Neutral Event Plot deck limit: 3. Poison. Reaction: After you win an challenge as the attacking player, place a poison token on a character without an icon controlled by the losing opponent. At the end of the phase, if that character still has the poison token, remove it and kill that character. (Max 1 per challenge.) Core Set #44 / Fear Cuts Deeper Than Swords 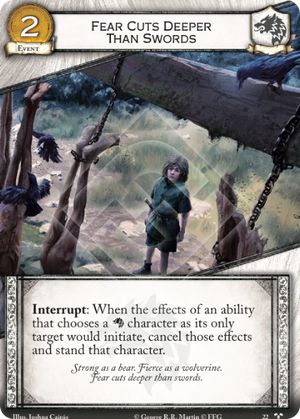 Fear Cuts Deeper Than Swords House Stark Event Plot deck limit: 3. Interrupt: When the effects of an ability that chooses a character you control as its only target would initiate, cancel those effects and stand that character. Called to Arms #22 ***** No Surprises 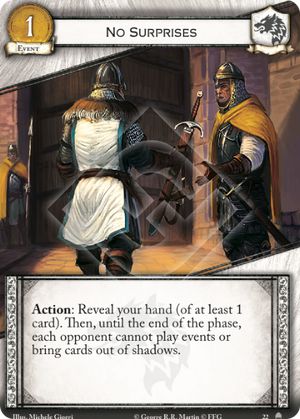 No Surprises House Stark Event Plot deck limit: 3. Action: Reveal your hand (of at least 1 card). Then, until the end of the phase, each opponent cannot play events or bring cards out of shadows. City of Secrets #22 ***** General Rules Errata
FAQ
1 comment 0 FacebookTwitterPinterestEmail